When I think about having to start over again at a new school, I’m reminded of Riley from Inside Out. This movie is a must-see for everyone, especially military families. It tells the story of a young girl whose parents up and move from her beloved Minnesota to strange San Francisco all from the perspective of five main emotions- Joy, Sadness, Anger, Fear, and Disgust.

Joy does everything she can to keep Riley happy all the time, and while trying to deal with the move, she banishes Sadness, and herself, from Riley’s consciousness leaving Anger, Fear, and Disgust in control of Riley’s behavior. The consequences are not good and by the end of the movie, Riley, her parents, and Joy learn that having a balance of emotions and learning to communicate them healthily is essential for helping us handle life’s biggest challenges.

As I sit down and prepare my daughter for middle school this year, I’m reminded of my choices before entering high school. I decided it was going to be a horrible experience and for the most part, it was. Sure, I had some good memories and made some friendships that didn’t last. But for the most part, I was miserable and I blame it on my mindset.

I was not raised to have a growth mindset, or at least encouraged to have one. My parents just said “be positive, your attitude sucks” and that was that. There was never a moment when they sat me down and heard me out or asked about how I was feeling about this foreign, unwanted experience.

I didn’t want to repeat this pattern because as they say, know better, do better. As military kids, my children have had to endure more than any child should have to and while this lifestyle promises to teach our children resilience and open-mindedness, it is so freaking hard.

One of the ways I try to help them respond is by fostering a growth mindset in the face of new and unfamiliar situations. Our moving situation last year was the pits. The one thing I didn’t want to happen happened and after only three weeks in school, we were forced to pull them out and move them to a different state where they had to start a new school after the school year begin. Before this move, the Army had been good about moving us in early summer.

This always allowed us to end things in our old duty station on a clean slate and we had the summer to get used to an area before having to start a new school in the fall. It was as perfect of a situation as the Army could give us. However, this last move… child!

It was the worst and it wreaked havoc on our kiddos. My son who has Autism had just started middle school which is an adjustment in and of itself and he was doing so well too, only to be pulled out and placed in a new school with a different demographic. We did what we could to ensure a smooth transition but he struggled with making friends and his grades illustrated how unhappy he was.

My girls did okay, my middle having the most seamless transition, but my youngest was behaviorally a mess. While she found a way to fix herself upon entering the school building each morning, her behavior before leaving the house was off the chain.  She’d get angry about the smallest details like her socks felt a bit tight, her pants hurt, or the bed sheets weren’t laying down just right. She’d hulk out every morning and then turn back into Bruce Banner upon walking into the classroom.  Out of all the kids, I would never have guessed that the baby would’ve taken this move the hardest.

So how did I handle this? How do I continue to preach a growth mindset among so much chaos caused by an outside entity that pretty much determines the course of our life? Consistency. Being consistent, having patience, having grace, being flexible, and encouraging open dialogue has helped our family weather many a storm to come to Casa Davis thanks to the many Army flub ups.

I won’t pretend to be the most patient or even flexible parent because I am not, but the one thing I have learned in therapy and through my experience as an early childhood educator is flexibility and availability. I always welcome open discussions with my children and involve them in all major decisions we make as a family. When we knew we were moving but didn’t know when or where we talked about it openly.

The whole not knowing thing was driving me crazy and I know it was making the kids very nervous too. I encouraged my children to express their honest feelings about the experience and validated their frustration and anger, their fear and excitement. As much as I wanted them to hold only positive feelings for their move and their new schools, I knew that for them to fully adjust to their new environments, they needed to be honest with all they were feeling and I did what I could to create a safe space for them to do so at home.

Another thing I’m big on is encouraging extracurricular activities because that, I believe, is one of the easiest ways to make friends. Moving to a new place is hard and being the new kid is never easy.

Like most kids, mine have specific interests, and natural abilities to hone. As such, I went to work early to find different sports, clubs, and other extracurricular activities for the kids to join to help ease the transition somewhat.

My youngest joined a Girl Scout troop, my middle continued interacting with kids via an Outschool Roblox club online, and my son joined the Track and Field team. I expressed to my children that this will be the norm, and as we look forward to another school year, they know that they are to find a club or an activity at school that interests them and join it.

One of the biggest pieces of advice told to second or third-time mothers who have young children is to include them in the preparation for, and care of, the new baby. Kids like to feel involved, even when they swear they don’t want a part in anything.  Most people want to feel important and have a say.

This pertains to the preparation for a new school year, especially when it comes down to entering a new school environment.  My middle is entering middle school this year, and although she has historically struggled with new situations, she tends to make friends easily and has recently been bringing home good grades and behaving appropriately in school. This was not always the case.

As this is still a new situation and I want to ensure her success early on, I tried to get her excited about her new adventure, and as such, I got her involved as much as possible. In Florida, there is the chance to choice into the school you want so long as it is in the same district. Charter schools are a big thing down here as well as magnet schools and because she had some choice, we wanted her to choose where she wanted to go to middle school.

On one hand, she wanted to stay with her friends who were going to the zoned middle school. But as of late, she has been really into art and has exhibited tremendous skill in it. Her brother attends a magnet school focused on the arts and as such, she chose to also go there in the fall.

As we near the beginning of school, we have also involved her in the back-to-school shopping. She has picked out all her major supplies, including her new backpack, and we dared not go clothes or shoe shopping without her. At 11, she is starting to care more about how she looks and we want her to feel her most confident not only on her first day but throughout her middle school experience.  I learned early on in my parenting years that giving children choices isn’t spoiling them but is allowing them to be more active participants in their growing up.

So while new has the very real potential to be scary, it doesn’t have to be. Even with very little notice and time to prepare, going into a new situation, such as a new school, gives our kids the chance for what other kids so often don’t get- reinvention. With new, our kiddos can tell a brand new story with each move; they get a chance to start over. I believe that when we, as parents, lead with that as a selling point for move number five in ten years, suddenly new doesn’t seem so bad.

So if you are among those who have kiddos starting a new school this year, remind them to find the good, encourage that growth mindset, and always, always, encourage truthful and honest discussions of all their feelings. The last thing we all want is a Riley from Inside Out situation on our hands. 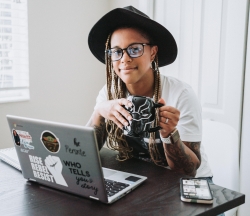 Robin Davis
Robin is a 30-something mom of 3 little mischievous, most loving rascals and wife to US Army staff sergeant and one of the best cartoon artists who doesn't know it yet.She is (secretly) planning to write a great American novel one day but for now, she works hard at the day job to pay the bills.She loves to run around in circles, eat carbs, read lots of books, and write anything and everything that creeps into her mind.She also loves fun music, fun movies, and holds an appreciation for the theater.

...writing in the third person is fun, too!

Visit Robin's blog by clicking on her name. YEP, it will take you directly to her website for more FABulous reads.

Sign up to learn about all of our TEA and special giveaways!