Skip to content
THEE Tea
Share a conversation
This website contains affiliate links and sponsorships in which we receive commissions and payment. As an Amazon Associate, we earn from qualifying purchases.

Where are you originally from?

I have been asked many times by the non-hispanic community, “Where are you originally from?” If I answer with a state I am quickly interrupted by, “No, ORIGINALLY like what country are you from?” If you can picture the attitude-driven phrase “excuse me” as a facial expression, that’s exactly what my face looked like.

I of course respond with, “The United States just like you.” It baffles me anytime I am asked that question and it turns out by one look people either assume I am from Mexico or am Native American. Personally, I think it is one thing for someone to wonder but it’s odd to ask a stranger that based on looks.

Have You Ever Felt so Far From Your Roots That You Almost Feel Fake?

In another sense, have you ever felt so far from your roots that you almost feel fake? I have and still do. If you put me in a predominately Hispanic community I fit right in, except for one thing. I don’t speak Spanish fluently. Shocker, right? Not really. It’s just assumed that every person with brown skin and who “looks Mexican” must speak Spanish.

Now let’s take this a little further. I now live only 15 miles from the border, yes, the Mexico border. I hear Spanish everywhere I go.

I feel so fake as I stutter over my words trying to put together my broken Spanish as properly as I can while receiving a confused look from the other person.

It’s tough to know your roots and still somehow not be able to fully embrace them. I do well with understanding but the return communication is where I need much more practice. In my opinion, society puts being bilingual on such a high pedestal, and rightfully so. But why do people judge, mock, and shame those who are trying to speak a different language but aren’t fluent yet? It’s not very encouraging to practice and be judged.

It’s not only language that can make us feel, “not Mexican enough”, it’s the holidays, the traditions, the meal, and so much more. As I walk through the store isles on one side I see Halloween and on the other, I see Dia de Los Muertos. Besides the beautiful colors and the google search answers, I don’t know much about the rights and wrongs on how to celebrate or decorate for the holiday. So to buy Dia De Los Muertos items and decorate my house, it feels fraudulent. Am I alone here?

Many times I have been questioned about the lack of Mexican tradition in my home or not teaching my children enough about our culture. If we question less and teach more, maybe we can further develop the Hispanic values, traditions, and way of life in a positive way.

All in all, there are so many cultures, traditions, beliefs, cuisines, and differences in America alone. Why not embrace them? As the saying goes, “Don’t judge a book by its cover.” Yes, I am brown, no I’m not great at speaking Spanish but I am trying. 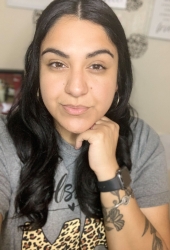 Grace Romo
Grace is our Marine Spouse Conversation Starter. She brings an eye-opening and heart warming view to the table as she dives into the truths of experiencing & surviving the harsh realities in life. As a survivor herself,Grace shares her journey of SA, trauma, grief and how that has shaped her today.

Her resilience has been built by the words- Survive. Reclaim. Thrive.

Latest posts by Grace Romo (see all)
Share a conversation